Located between 20o22'00" to 20o27'25" North Latitude and 72o49'42" to 72o54'43" East Longitude, on the west coast of India, Daman occupies an area of about 72 square kilometres. The Daman Ganga River divides Daman into two parts- Moti Daman to the south and Nani Daman to the north. Home to a number of bewitching beaches, historical ruins, sleepy villages, palm groves and many more attractions, Daman is truly a paradise for the tourists. It is a perfect getaway for those seeking calmness and solitude amidst the company of nature, away from the maddening crowds of a city.

Daman enjoys a mild and moderate climate throughout the year. Due to its proximity to the sea, it experiences high humidity. In summer, from March to May, the average temperature is about 26°C to 37°C. May is generally the hottest month and experiences high temperatures. The average temperature in winter from November to February is between 10°C and 32°C, with January being the coldest month. However, sometimes, due to cold winds, the temperature here might even fall below 7°C. Daman experiences moderate to heavy rainfall from June to September. Though Daman can be visited throughout the year, the best time to visit it would be during the winter season from November to February, when the temperature is pleasant and one can enjoy nature at its best.

Daman, at the mouth of river Daman Ganga has a unique and enchanting topography that makes it a popular destination among the tourists. It is surrounded by Valsad district of Gujarat on the north, east and south and the Arabian Sea to its west. Bhagwan, Kalem and Daman Ganga are the major rivers in Daman, all of them flowing towards the west. The Daman Ganga is an important river that divides Daman into two parts – Moti Daman (Big Daman) and Nani Daman (Small Daman), both connected to each other by a bridge. 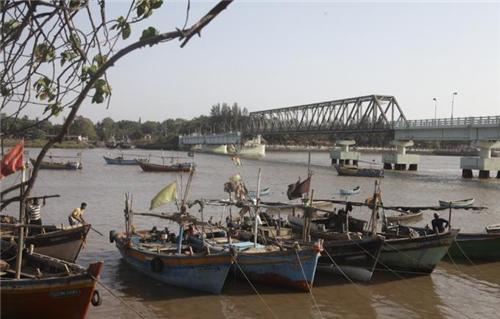 Soil and Vegetation in Daman

Daman lies on an alluvial coastal plain. The major areas of Daman are covered by black soil. The sandy and clayey nature of soil gives rise to occurrence of basalt on a large scale. The soil is moist and fertile, and is conducive to the growth of paddy, ragi, groundnut, pulses and beans, wheat, banana, sapota, mango, coconut etc. Thorny scrubs and palm trees are found scattered in the coastal areas. The Damanganga project has been undertaken to tap surface water, to improve the irrigation facilities and increase the yield by following double cropping methods.