Forts and Monuments in Daman

Known for its scenic beauty, Daman is also quite popular for housing a number of historic forts and monuments. These monuments speak volumes about Daman’s glorious historic past and are a reminiscent of the Portuguese rule in Daman. These monuments are known for their flawless beauty and historic importance that they hold. A walk through these forts is like walking through various centuries of history, the rich Indian history along with traces of Portuguese influence.

The majestic fort of Nani Daman occupies an area of about 12,250 square metres, with three citadels and two gateways. It is said that the construction of this fort was started by the Portuguese in the year 1614 AD and was completed by 1672 AD. It is named after St. Jerome, one of the most renowned fathers of the Catholic Church. One of the main highlights of this fort is the huge gateway, facing the sea with a large statue of St Jerome and two human figures on its either sides. One of the most eminent buildings located within the fort is Our Lady of the Sea Church. There are beautiful inscrietions and carvings on the walls of the fort. From the fort, one can get a panoramic view of the Arabian Sea, Moti Daman Fort and the fishing trawlers in the sparkling waters of the Daman Ganga River. The fort also houses a cemetery and an open ground. You can reach the top of the fort by means of a few stone steps, located around the fort. At the top, there is a pathway, from which you can get a magnificent view of the sun set. A tour of the entire fort takes about an hour’s time. This fort is one of the best depictions of the Portuguese architecture. 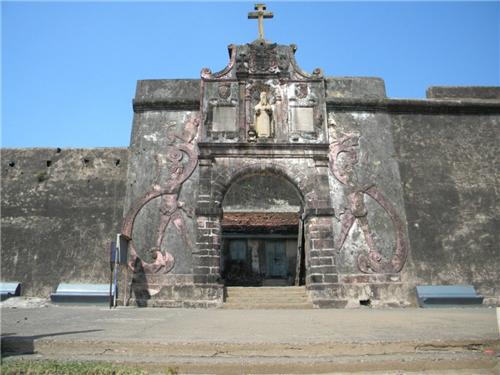 Spread over an area of about 30,000 square metres, it is said to have been constructed in 1559 AD, after gaining control over the Muslim bastion that was previously present over there. The fort comprises of ten citadels and two gateways - Southern Land Gate and the Northern Sea Gate with number of inscriptions. The fort is polygonal in shape, with a deep trench, supposed to be built to shield it against the enemy forces. There are projections of about 500 feet high at regular intervals throughout the structure of the fort. A flight of steps connect the terrace to the inner ground surface. In addition, there are barracks of the defence personal along the inner wall. You can see the Secretariat, palaces and other important official buildings on the northern side of the fort. It is believed that Portuguese nobles resided within the fort along with their families. Throngs of people from far and wide throng to see this majestic reminiscent of the Portuguese past in Daman. 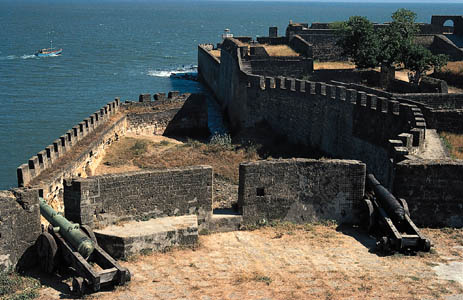 This fort has been well maintained with planned roads, mini gardens, cafes and lush greenery. A circular road has been built recently, that appears like a necklace around the fort. The fort houses a number of attractions like the Cathedral of Bom Jesus, the Chapel of Our Lady of Rosary and the Dominican Monastery, which are worth visiting. A new aquarium named Hilsa Aquarium has been constructed within the fort, with a variety of fishes and submarine boat ride, attracting huge numbers of visitors. You can avail the services of buses, taxis and auto rickshaws from the main city to visit the Moti Daman Fort. 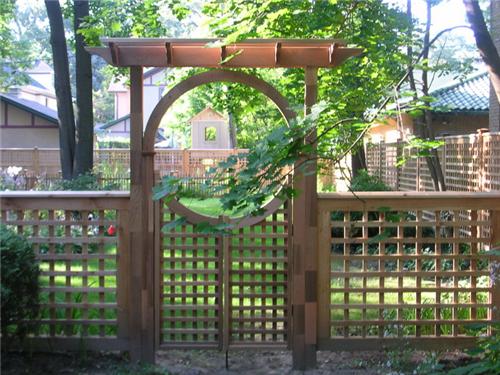 It is located within the Moti Daman Fort premises and is said to have been built in the memory of the Portuguese soldiers, who fell during the liberation at Dadra and Nagar Haveli. The Pargola Garden resembles the Pantheon at Athens and houses on its left side entrance, the dwelling of the 18th century Portuguese poet, Bocage, popularly called as ‘House of Bocage’. The tiny house lies there locked, and contains a marble tombstone, above its door, denoting the fact that the poet indeed resided here.

A visit to these monuments is thus a perfect getaway. These imposing structures are perfect examples of architectural excellence. These are a must visit to those who wish to understand India’s rich and glorious past and experience the colonial rule.